Wente will come to Wake Forest from Vanderbilt University. Serving as Vanderbilt’s provost and vice chancellor for academic affairs for the past seven years, Wente took on the additional role of interim chancellor from August 2019 to June 2020. At Vanderbilt, she advanced the excellence of academic programs and guided the University’s response to the pandemic. 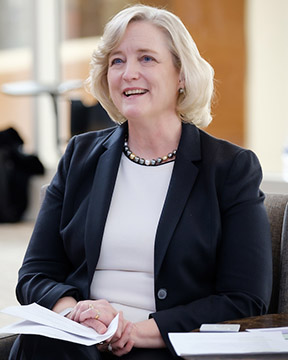 Wente has been widely praised for her bold and engaged leadership and for accomplishing a number of firsts, including the appointment of Vanderbilt’s first female athletic director and the creation of the university’s Office of Inclusive Excellence. Wente led Vanderbilt’s efforts to launch a new structure for the university and medical center’s academic relationship. As provost, she has been the chief academic officer responsible for all 10 of Vanderbilt’s schools and colleges. During her tenure, she has overseen innovative initiatives to enhance the undergraduate experience and elevate the arts and humanities; she was the Vanderbilt faculty athletics representative for the Southeastern Conference and NCAA; and she developed the university’s 10-year strategic plan.

Wente holds a doctorate in biochemistry and began her teaching career at Washington University’s School of Medicine. She served on the faculty there from 1993 to 2002. She was recruited to Vanderbilt and served as a professor and chair of the Department of Cell and Developmental Biology in the School of Medicine. She advanced through the administrative ranks at Vanderbilt, serving as associate vice chancellor for research and senior associate dean for biomedical sciences, before becoming the University’s provost in 2014.

While charting the course for higher education institutions, Wente has maintained a commitment to groundbreaking research.

She has personally mentored dozens of graduate students and postdoctoral fellows. In the Wente lab, she and her laboratory team focus on understanding pathways between the nucleus and cytoplasm of cells. Wente has authored or co-authored more than 100 peer-reviewed research articles and has served on editorial boards for leading academic journals in her field.

Wente has received a number of honors and awards for her research, leadership and community engagement, including the MERIT award from the National Institutes of Health (2010 – 2020), the Women in Cell Biology Senior Career Award from the ASCB (2011), the John H. Exton Award for Research Leading to Innovative Biological Concepts (2008), the Kirsch Foundation Investigator Award (2001 – 2003), the Beckman Young Investigator Award (1996). She was named a Woman of Influence in the “Trailblazer” category by the Nashville Business Journal (2020). Additionally, she is an elected fellow of both the American Association for the Advancement of Science and the American Society for Cell Biology.

Other positions held at Vanderbilt: